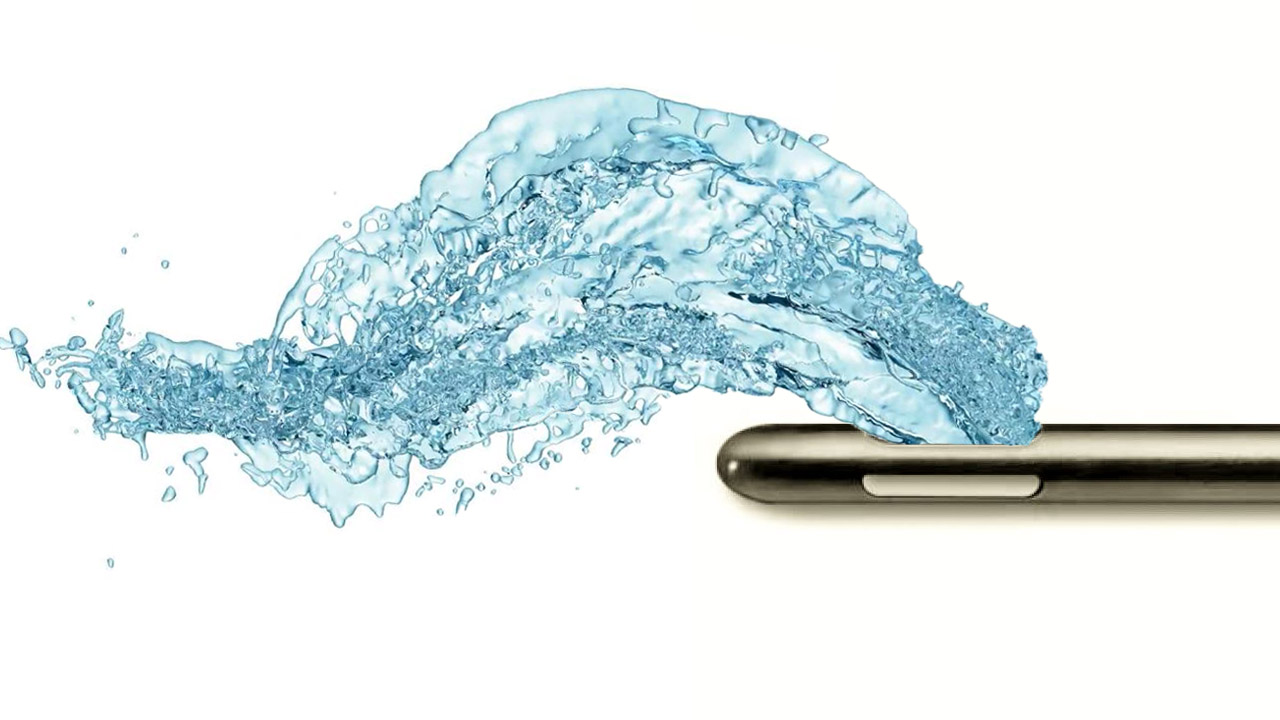 There are many advantages to Waterlipo™ using the tumescent technique.

First, the patient does not require general anesthesia, minimizing risks and avoiding the side effects such as nausea and prolonged recovery.

Second, because Waterlipo™ relies on a stream of water to wash out fat uniformly instead of scraping with a cannula, results are more precise and smooth.

Third, because the procedure is so gentle, less tumescent fluid is needed during the procedure which makes it so that the physician can see your results in real time rather than guessing what you will look like in 6 weeks *.

With the patient being awake this provides tremendous advantages to the liposuction surgeon. The patient has muscle tone and can flex and tighten certain muscles which makes targeted fat extraction easier.

Many people ask about what happens to the extra skin after fat has been extracted. The answer is that the water seems to create a contracting effect on the skin. In addition, in patients with more skin, our surgeon performs the Waterlipo™ procedure with both the body jet cannulas and with laser liposuction to maximize skin retraction (source orlandoliposuction.com). This, along with the Skin Tyte™ treatment a few weeks after a liposuction procedure can have a positive skin tightening effect on the patient *.

Waterlipo™ is also unique in that the vast majority of patients feel that they can go back to work the next day. That is not to say that some level of soreness is not to be expected for a few days, but patients usually require only over-the-counter pain relievers and have little trouble returning to work or school very quickly.

Waterlipo™ is usually less costly than other methods of liposuction. Since the procedure can be performed under local anesthesia without IVs, there is no need for the surgeon to hire an anesthesiologist. In addition, the procedure is most often performed in the attending surgeon’s office, which is more cost-effective than booking a hospital operating room.

How the procedure performed?

With Waterlipo™ very few tiny incisions are made around the targeted area to inject the numbing local anesthetic and for the delivery of the numbing medication (tumescence). The incisions require no stitches, they heal within days, and they leave no significant scars. After the area is numbed, the surgeon gently guides a cannula through those same tiny incisions. At the tip of the cannula which looks like a straw, a stream of water sprays out 360 degrees. The water pressure essentially dislodges fat while simultaneously leaving more useful structures such as blood vessels and other connective tissue completely intact. 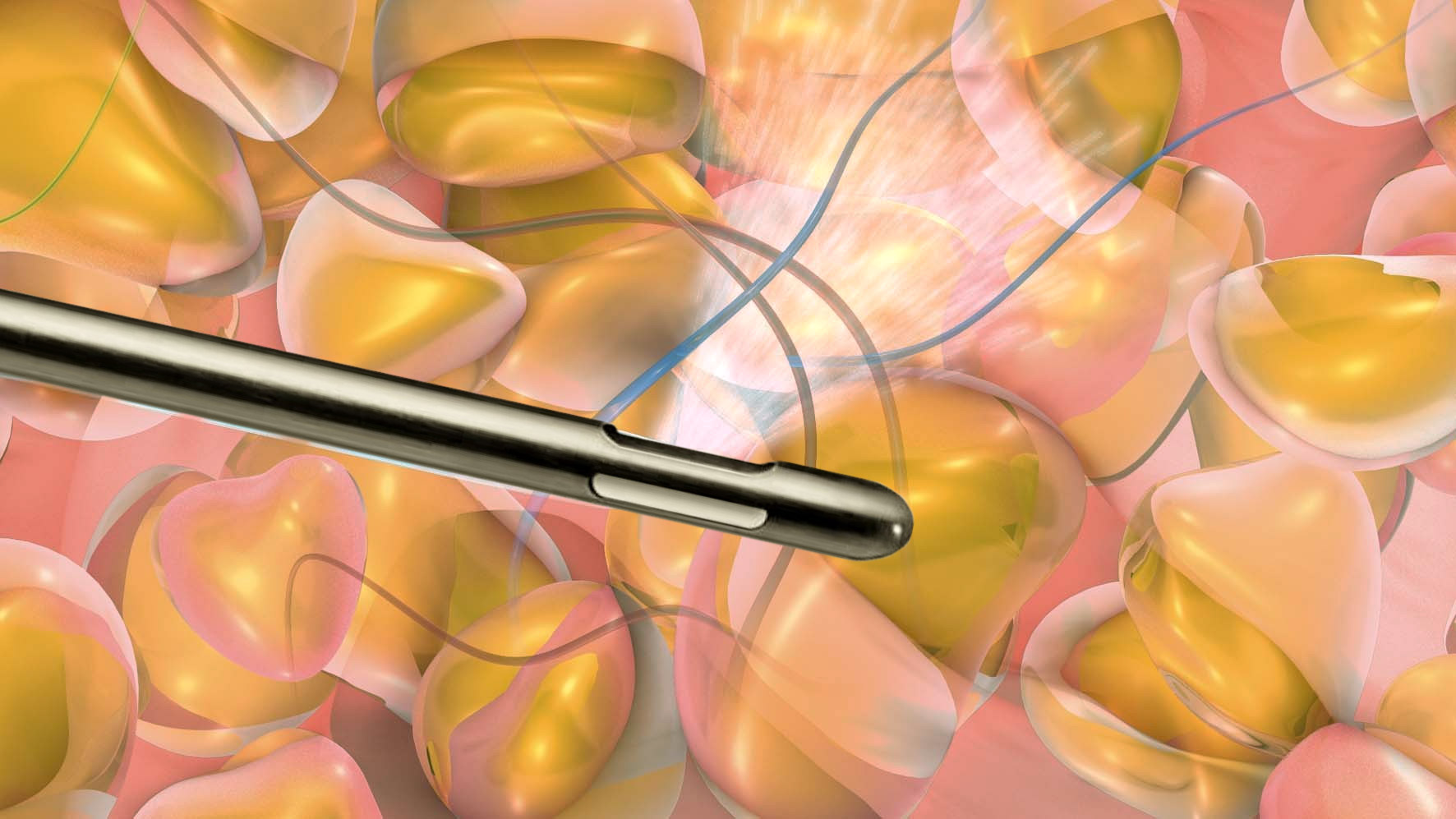 A small vacuum at the end of the same cannula then collects the fat that has been dislodged by the water. Because the surgeon is not scraping at the fat such as in other liposuction techniques, results can end up very smooth [*]. This smoothness comes because the water is doing the work rather than the scraping effect of the cannula. After some of the fat is extracted, a laser fiber is used to then tighten the skin in the treated area. This procedure is fairly gentle, because it causes far less bleeding, swelling and bruising (unlike traditional liposuction). The minimal invasiveness of the procedure can allows patients to see remarkable results, fast [*]. In addition, because only local anesthetic is used for this procedure, Waterlipo™ carries much fewer risks than traditional liposuction.

Is the right procedure for me?

Waterlipo™ is designed to address bulges that do not respond well to exercise. Everyone is programmed to a have a certain number of fat cells in different areas of their body. This is often related to genetics. That’s why some people might be athletic, or otherwise relatively fit but may have love handles, saddlebags, or the dreaded ‘muffin top’ spilling over their belt. Some individuals have trouble areas that are not in proportion to the rest of their frame, like especially large arms, or, in men, excessive tissue in the breast area (troublesome ‘man boobs’). Other factors such as body changes after giving birth may also contribute to these bulges. Virtually any area from the neck down to the knees may be addressed with Waterlipo™ . Where there is an out of place bulge on the body, Waterlipo™ is likely able to solve the problem in the safest, most gentle way possible.

How Many Treatments will I need?

Typically only one treatment is required per region or designated area. Each session (per body region) lasts only an hour or two, depending on designated region and desired outcome.

How does Waterlipo™ Differ From Laser Liposuction? 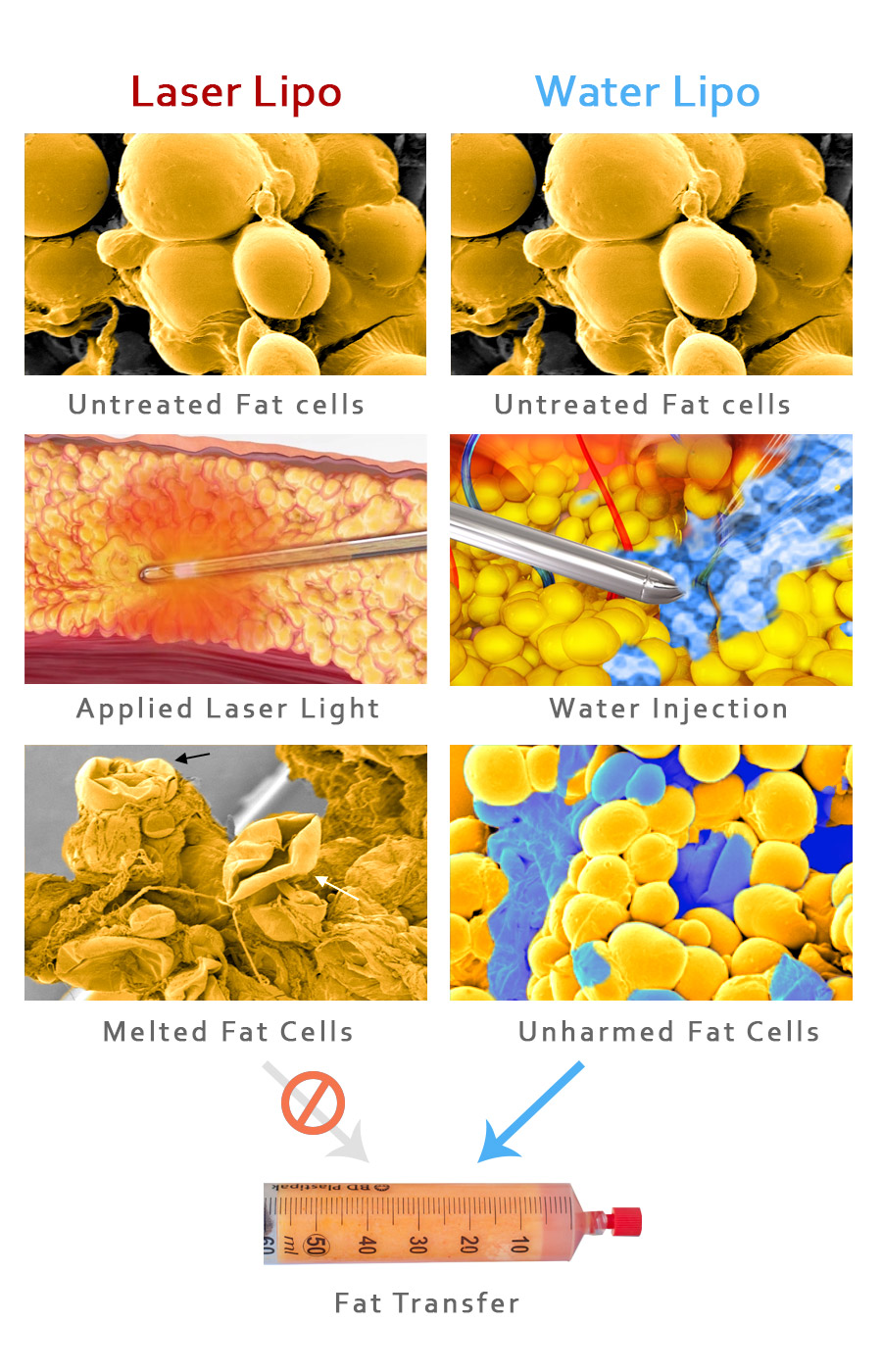 Laser-assisted liposuction heats and damages the fat cells, leaving them not suitable for fat injection

How Long Does It Take To Recover ?

For most patients, there is virtually no downtime with Waterlipo™ . Even so, we do recommend you plan on taking 1-2 days off of work to be sure. After all, everyone is different and responds uniquely to procedures. We have experienced patients (our own office manager for example) who actually go back to work the same afternoon after a morning Waterlipo™ . Others may spend a weekend at home resting before returning to work (looking sharp!) on Monday morning. However, we have found that universally, the recovery time from Waterlipo™ is significantly quicker and painless compared with those who undergo traditional liposuction.

Will I Have Loose Skin After Waterlipo™ ?

This is a question that is often asked, especially by women who are thinking about having a tummy tuck. Because we do laser liposuction (ProLipo) on most areas where Waterlipo™ is used, the answer is absolutely not. With traditional liposuction this certainly was an issue: sagging skin resulted when the fat extraction left skin without any structure to hold it up. Harnessing the power of our laserlipo fiber, however, we can simultaneously tighten skin up to 20% after extracting the fat. The good news is that for many women who are contemplating a tummy tuck but do not want the large scars and significant recovery time, Waterlipo™ with laser is an effective, less expensive, and safer alternative.

Can I Use My Own Fat To Put Somewhere Else?

Yes. Because Waterlipo™ is so gentle, the extracted fat is not crushed and damaged. This pristine fat is ready to put right back in somewhere else. For people who get fillers like restylane or juvederm, it’s a great alternative. It is all natural because its coming from your own body and the results can last longer, unlike juvederm which lasts only for about 6-8 months [*].

What If I Have Fat Deposits Distributed All Over My Body?

Commonly, patients come in with an overall weight issue, yet one prominent area of bulging. For these patients we suggest a plan that includes Medical Weight Loss (a physician-directed weight loss program that lasts just 40 days.) At that point, patients return for a consultation to see where the incongruous bulges remain. Often, to their surprise, the weight loss has solved their bulge problem and a skin tightening procedure (Skin Tyte™ or laser lipolysis) is all that’s required to smooth the skin around the now slim physique [*].

What happens after doing Waterlipo™?

After the treatment there will only be minimal pain and swelling. We recommend 24 to 48 hours of rest, but most patients are able to return to work the next day. You will be required to wear a compression garment under your clothes that is not visible through your clothes for about one week after your procedure. Because Waterlipo™ is a safe, targeted procedure that utilizes water pressure to dislodge fat cells and only local anesthetic is required. The side effects are minimal. Any discomfort or mild soreness goes away within a few days in the vast majority of patient. There are no stitches and the tiny puncture wounds heal within two days. Patients may have mild discomfort and bruising, but they can walk, resume normal activities and return to work almost after a brief recovery [*].

How Much Does Waterlipo™ Cost?

Everyone’s body is different so it is difficult to make a generalized cost statement. One person’s hips may be very wide, and another’s hold just a discrete pouch.

We provide price examples in our Liposuction Cost page.

However, because we perform Waterlipo™ and laser liposuction in the office instead of a hospital or surgical center, patients save a significant amount of money compared to traditional liposuction. The good news is that consultations are free. so THERE IS NO REASON NOT to make an appointment and have an easy answer to this question or any other question you may have about the procedure.

What if I do not want to be totally awake during my procedure?

We NEVER use general anesthesia for liposuction procedures because we feel it is simply unsafe. However, we do offer the option to do the procedure under “Twilight” which is essentially a slightly stronger form of sedation than the usual relaxing pills we provide for you. This type of sedation is EXTREMELY safe and adds virtually no additional risk the way general anesthesia does. Please let us know if this is something that you wish to discuss.

Contact us for a free consultation and see if Waterlipo™ Body Sculpting is right for you.

or fill out the form